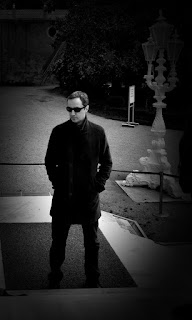 born in 1968, mannheim, germany. lived there till 1974, then moved to izmit, turkey with family. studied chemical engineering at bogazici university. double m.a. in political science, bogazici university, istanbul, and columbia university, new york. his ph.d. dissertation was on "collective political action in the turkish press, 1950-1980". wrote his first short stories during english composition exams, under duress. won a prize for his two novels that appeared in 1992, but did not bother to pick it up. held one reading in 1993, but onlyt the clerk next door showed up. worked at yapı kredi publications, one of the biggest publishing houses in turkey, between 1992-2004. founded g yayin grubu, a firm that provides complete publishing services. founding partner of hayat bilgisi, aschool offering courses in the culture industry, culture, and the culture of life. he was the executive director of koc university press from 2014 to 2018. he is currently the editor-in-chief of can yayinlari. akas has been living in kadıköy, istanbul, since 1986.

cem akas has published ten novels, five collections of short stories, two volumes of essays, two books for children, and a monogram on robert college, one of the oldest schools in Istanbul. his work is said to be marked by a strong sense of structure and intrigue, humor, and command of dialogue; in fact, he has been dubbed "the play-setter of turkish literature". anthology of the intersections of a point (1990), his first collection of short stories, has been praised as "the M.A. thesis of a slightly drunk sociologist cum physicist cum 'twilight Zone' scriptwriter." In 1992, akas published two novels to wide critical acclaim: 7 is the pseudo-documentary story of the initiation, rise and fall of an underground prophet, intertwined with the account of an occasionally "eroto-graphic" and eventually violent relationship, and "trompes d'oeil" about the nature of reality and fiction. crime and punishment is akas's second novel; his version is much shorter than the russian original, and has two beginnings: on one side is a perversely analytical essay on how writers kill their characters in their fiction, which evolves into an exploration of the possibility of readers killing authors through the act of reading itself. on the reverse side is the diary of the author of the essay, who is under the severe delusion that he is hounded by a terrorist organization - this is a personal account of the single-handed battle he wages (in the style of the old don) in a world where to read is to kill.

In 1995 cem akas published another book of short stories, entitled secret air museum, in which he emulates the styles of cortazar, calvino, barthelme, asimov, burgess and borges. published without its real author's name, this book has been "deciphered" as a typically akasian work, and a silent yet clever rebuttal of the post-modernist claim that the "author" is dead. early in 2000 the first volume of the trilogy of the age of maturity appeared: where the fish fell captive. the trilogy involves a world, set roughly in the 2100's, where a transnational company called the Project aims to install a new caste system based on the privilege to use technology. a group of rebels try to organize an upheaval against this scheme, only to find out that the real plan is much more complicated. the remaining volumes of the trilogy appeared in 2001: quicklime and the empire of games.

in 2002, akas published his collected short stories under the title r, a consonant he has trouble pronouncing. This volume was followed by the kant club in 2004, which aimed to introduce the young adult readership to the world of cem akas, and by urbino for the unwilling traveller in 2007, a pseudo-travel book set in urbino, italy.

his latest work is a novel entitled the shortest form of time (2020).

his works have been published in canada, germany, austria, argentina, greece, spain, albania, australia, hungary and the united states.